Imagine making a New Year’s resolution where you committed to doing something every day for one year. That seems plausible depending on what that “one thing” is. What if I said it was to run eight miles on a beach every day for an entire year?

Robert Kraft, known as Raven, made such a resolution on January 1, 1975. On the heels of losing one of the world’s greatest legends, Muhammad Ali, it seemed only fitting to write my next blog on another person who is a legend in his own right; a person who ran with Ali in the seventies on Collins Avenue in South Beach.

Fast forward 41 years and Raven still runs eight miles every day on South Beach at 5:15pm, setting a world-record for the longest running streak, on sand, in the same location. I first heard about Raven in 2009. My husband had seen his ESPN interview and true to my husband’s style, he was determined to meet and run with the living legend.

Shortly thereafter, we scheduled a trip to South Beach, Miami where he could join in the Raven Run. As I dropped off my husband at the 5th Street Lifeguard Station, I couldn’t help but wonder who in their right mind would dedicate his life to running on a beach, much less inspire others to do the same. It was at that very moment when I returned to pick up my husband after his 8-mile run (with a black Raven Run shirt in hand) that I witnessed the sheer look of enlightenment on his face that I knew Raven was extraordinary.

Up to this point, I was a self-proclaimed “non-runner.” I would religiously workout in the gym but the idea of running, much less outside, didn’t interest me. My husband went on to run a dozen more times with Raven; each time bringing with him a few friends or business colleagues so they too could experience the Raven.

In 2012, I ran my first 5K for charity, then a 10K and before you knew it I was hooked on running. I made myself a goal that on our next trip to South Beach I would run with Raven.

On December 26, 2013, on a cold, dark, rainy day, (not the blue skies, gentle breeze and warm sun I had envisioned) I completed my first Raven Run with my husband and five other Raven enthusiasts. I earned the nickname, “Almond Joy,” not because of my love of the candy bar (although I do enjoy eating one occasionally) but rather, for my unapologetic love of almonds.

Raven has given out more than 2,000 nicknames to runners that complete the eight-mile run with him. The nicknaming tradition started early for Raven where he himself was given the nickname Raven in high school for wearing only black and keeping late hours. Completing the Raven Run was a momentous accomplishment for me. It was my first eight-mile run ever and I ran it on a beach! 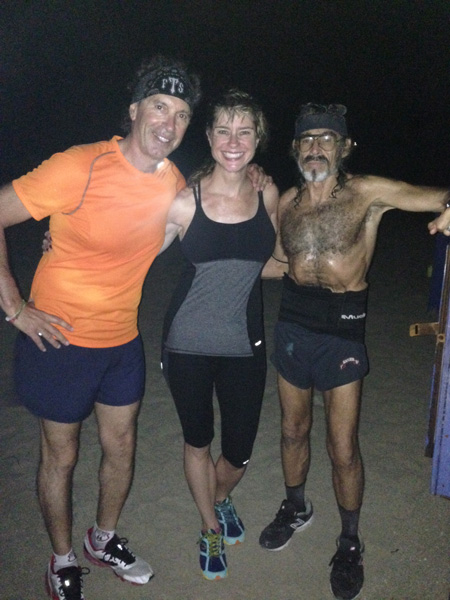 As a direct result of completing the Raven Run I learned four important things:

Running alongside Raven was everything I had read and heard about him and more. His voice was soothing and inspiring as he cheers runners on and starts out the run by doing a roll call using their given nicknames. For new runners (rookies), he learns about them as they run asking them questions about their work, hobbies, interests, and life. By the end of the eight miles, he bestows a nickname based on their personality, passion, or quirks. Not only do you feel a sense of accomplishment at the end of the run but also now you have your own “brand” if you will and are part of a larger community.

Raven is an example of building a brand seemingly unknowingly, a brand that has developed and transformed over the years. You won’t find him to be self-promotional. What you will find is a superb storyteller, with a photographic memory (especially with dates) and an infectious smile that connects and engages people on a very personal level.

True to form, Raven is as committed to other passions besides running. For example, the color black. You won’t see him in any other color, even down to his running socks. The only exception is the color of his shoes, which brings me to his next obsession – New Balance running shoes.

He has gone through hundreds of New Balance shoes, making him a true brand loyalist. In fact, I sent an appeal letter to New Balance a couple of years ago to feature him in an ad campaign. What better advertisement could there be than a record-setting streak runner inspiring thousands of others to enjoy the benefits of running, all while wearing New Balance shoes? In the meantime, Raven was asked to participate in the 2013 Nike commercial with LeBron James. 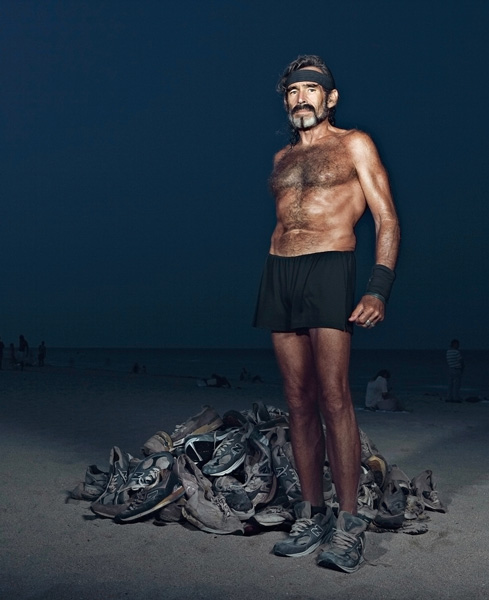 There are countless lessons to be learned from this remarkable person. Here are a few of mine:

Oftentimes the most inspiring people come from a place of hardship or heartbreak. Raven is certainly no exception to that. He’s dealt with OCD since childhood, endured chronic back pain for more than 20 years, and suffered a heartbreaking end to his musical career in Nashville when the lyrics he wrote were taken and used by another artist that later became a big hit.

When he returned to South Beach feeling defeated and angry he turned his energy into making that one New Year’s resolution that would change the course of not only his life, but the thousands of others that he encountered.

Running has become part of his identity, but there’s so much more to him than the physical act of running. The Raven “brand” inspires others to change the way they think about themselves and what life has in store for them, much like the long road ahead on a run. In Raven’s case, he is “unstoppable”.

I will leave you with some of Raven’s lyrics that, not surprisingly, were formed during one of his runs.
“The road is long and it is winding,
The ties were tight and they were binding,
Now I’m gone, it’s reminding me,
The road is long.”

Please share in the comments below any insights or experiences you may have encountered when it comes to building a remarkable personal brand. Or, if you’ve completed a Raven Run, I’d love to hear about your experience and what nickname you were given and why.

Michelle is Mariola Unlimited’s Chief Brand Officer and has 20 years of experience in branding and marketing strategy. Her blog is dedicated to sharing her mastery of marketing best practices, insights into building brand equity, and her reflections on creating intentional cultures and the leaders that make it happen.