When it comes to using punctuation only one thing comes to my mind … going, going, gone. For years now, grammarians and linguists have been up in arms about the alarming rate of the misuse and lack of punctuation. We can thank digital communications for this quandary.

The lines have become blurred between personal and business written communications.


Today, people (writers included) deliberately don’t use punctuation. On social media sites such as Facebook and Twitter, where space is limited, punctuation becomes an extraneous character – therefore is unnecessary. Just recently, Twitter announced that usernames and images would no longer be part of the 140-character count … yet no mention of punctuation.

Text messaging has further compounded the issue. There is some sort of code of acceptance to omit punctuation without (almost) anyone taking notice. This is where the blurred line happens.

Texting and emailing have cultivated a lax way of writing. Since much of our lives include this form of messaging, we are creating a (bad) habit that is hard to break. This can and has carried over to business writing.

When writing for marketing purposes, being creative and expressive is not only encouraged, it’s expected. Artfully using punctuation can make a noticeable difference in standing out rather than blending in.

If you are a marketer, breaking through the clutter and expressing yourself in a meaningful, memorable way is paramount. Now more than ever we have the freedom to use punctuation to emphasize an idea, evoke an emotion, or draw attention to any given phrase, headline, subject line, or message.

Here are 7 tips to use effective punctuation in marketing:

A newer trend in email subject lines brings into play a chevron effect by using greater than and less than symbols.
e.g. >>>>>$20 & UNDER LAST CHANCE SALE!<<<<<

Add an exclamation point or question mark in an email subject line!

Allow one space at the end of a sentence before a ? or ! The visual space allows for a mindful pause ! In the French language, punctuation requires a space before double signed punctuation marks such as semi-colons, colons, question marks, and exclamation points.

Use special characters such as vertical bars (a.k.a. pipes) instead of commas to visually | separate | points. Use parenthesis around an exclamation point (!) to highlight its importance.

Insert a colon after an attention-grabbing set of words.
e.g. Limited Offer: 50% Off Leather Jackets

Try ellipses to create a sense of urgency and anticipation.
e.g. 5…4…3…Time Is Running Out

As with any tips on ways to incorporate punctuation into your messaging, it is wise to use them sparingly to get the biggest impact.

Emoticons are the new punctuation.

At first, emoticons [emojis] were simply several punctuation characters or symbols put together to express a feeling at the end of a sentence.

Emojis are used more and more (especially in social media) as a type of punctuation. Rather than an exclamation point or question mark, writers might use an angry, surprised, or puzzled-looking emoticon to give hints as to how to interpret the rest of their message.

Today, emojis have developed far beyond the early days and have been replaced with professionally illustrated ones that cover (almost) every emotion, feeling, hobby or interest.

But not all emojis are universally understood for what they really represent. USA Today recently posted a video on the 5 Emojis You’re Probably Using Wrong.

“Punctuation” has it’s own national holiday.

Say what? Yep. For nearly 12 years, September 24th has been recognized as “National Punctuation Day.” Although an “unofficial” holiday, it was founded by Jeff Rubin, a former newsletter publisher and reporter. Rubin was so frustrated by the mistakes he noticed in the newspaper that he founded National Punctation Day in 2004 as a day to promote correct usage of punctuation. Teachers, educators, publishers, journalists, writers, editors – rejoice!

Punctuation has a purpose beyond what it was intended to do.

Punctuation has a purpose and, if used wisely, can be highly effective. Beyond the obvious benefit of making you look smart, punctuation can add a bit of zest to your (marketing) message and sharpen the blurred lines. But for those where the lines are still blurred between personal and business writing this one is for you…

Have you seen other creative uses of punctuation that you’d like to add? Share them in the comments below!

Michelle Mariola is founder & director of ISH-Productions, a Chicago-based branding and marketing company whose mission is to help emerging to mid-market companies develop their marketing strategies and brand identities. 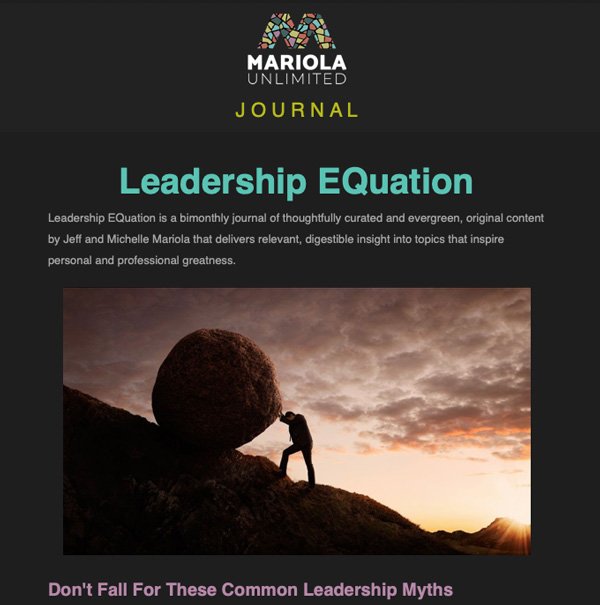 Leadership EQuation is a bimonthly journal of thoughtfully curated and evergreen, original content that delivers relevant, digestible insight into topics ranging from high-performance leadership, emotional intelligence, culture-building, and the trifecta of branding (corporate, personal, and employer) to guide and inspire you.

You have Successfully Subscribed!